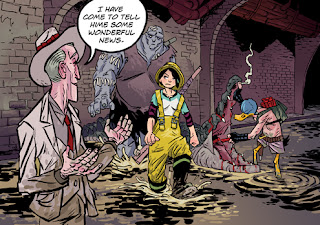 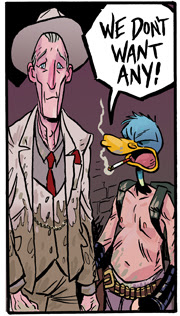 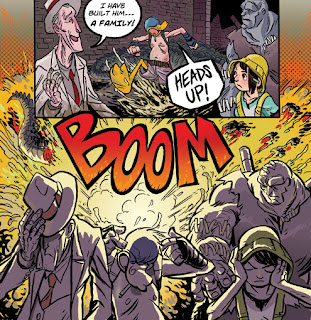 Just working out the color for "Family Reunion" Really starting to get a handle on the color scheme, havn't done alot of Bill, Cricket 'n Frankie stories in color before, want to keep the palate pretty murky, wish I could post more of this
Posted by Joe Flood at 4:27 PM No comments: 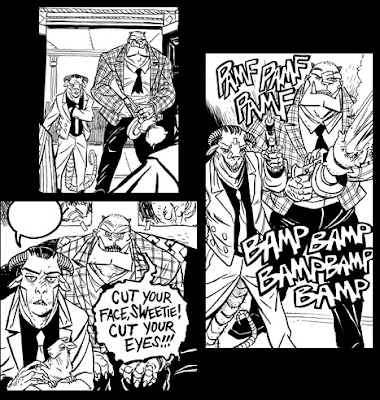 Here are some panels from Hellcity 2, a lot of the action in the second installment of this graphic novel, written by Macon Blair, revolves around these two hired hit-men, Thumbscrews, the short rat-like one and Boilermaker, the heavy hitter in the plaid jacket. I'm not gonna go into too many details as far as plot, don't want to give too much away. I've been reading a lot of Ian Flemming's James Bond novels recently and I've definitely been influenced by it. In the novels Bond is frequently up against all kinds of hired killers, some underworld gang and mafia types (see "Diamonds are Forever and "The Spy Who Loved Me", and read the books those two films are shit, despite one of them being a Connery) What as influenced me the most is the way many of Bonds adversaries revel in the death and havoc they reek. When drawing Thumbscrews & Boilermaker I try and really push the fact that they enjoy their work in a place where it's pretty every demon's job to spread misery. The two hired goons show up in Hellcity 1, but only in a few panels close to the end. In volume two readers will get to see these two cause lots of carnage and mayhem, Hopefully I'll get around to posting more stuff from Hellcity, some exclusive sketches and pin-ups you won't get in the book when it comes out sometime in 2008, fingers crossed.
Posted by Joe Flood at 10:46 AM No comments: