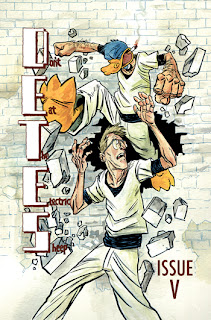 I was at the Mocca festival last week, and I had the chance to show off my latest issue of Don't Eat the Electric Sheep. It's ish number 5 and I'm pretty excited. I had a really good weekend at Mocca, (New York's best indie comic convention) I've still got to make the rounds to all the local comic shops some time next week, so for those of you in the New York area keep a look out for it. For everyone else, you'll have to wait 'till I work out my current situation w/ Diamond. But enough about me, back to Mocca, the best find was at Angry Jim's table, he had these stuffed toys of his Pot Roast character from his Firefox comics.
http://www.angryjim.com/ 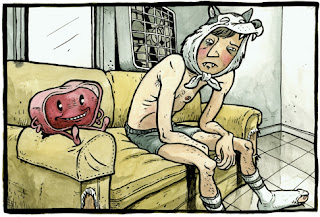 I also got to meet Doc Hammer and Jackson Publick of Venture Bros. fame.
I was a little nervous but my girlfriend prodded me into going up and introducing myself.
It was embarrassing but I don't think I came off as a total psycho or ravenous fan boy.
Well more on the comic extravaganza that was Mocca in a few days, I still have pile of comics to get through.